How Aspiring Sportscasters Can Build A Demo Reel

It’s perhaps the single most important piece of any job application…the demo reel. While it’s not the only important piece, I’d argue that you could get through the next phase with sub-standard resume and cover letter….but no-one is proceeding with your application if you demo isn’t inch perfect.

Recently, Lifer Ashlyn Tullis reached out and asked how she could go about building a demo reel while still in college. So in order to answer her question, and one that’s been asked a thousand times in two thousand different ways, here is my process for creation of a demo-reel from both a logistical (what to include, how to format it) and a technical stand point.

Logistical: What do include, what to discard, how to format it

I’ve covered demo reels before on Sportscaster Life, both how to edit one and what to include, but it’s a very popular topic and well worth repeating.

Employers seem to want to go a couple of ways. Many still want to see a produced demo reel made up of some highlights, extended and unedited play-by-play, an interview and maybe a talk radio segment if the job warrants that. The lure of clicking one file and being able to get a good snapshot of a candidate is one that’s very attractive. Others accept portfolio websites which include a variety of samples of work (cheap plug for my own here) and allow the employer to select what they want to listen to. There are pros and cons to both scenario and it is very important that you read the job application carefully and gauge what format paints you in the best light. 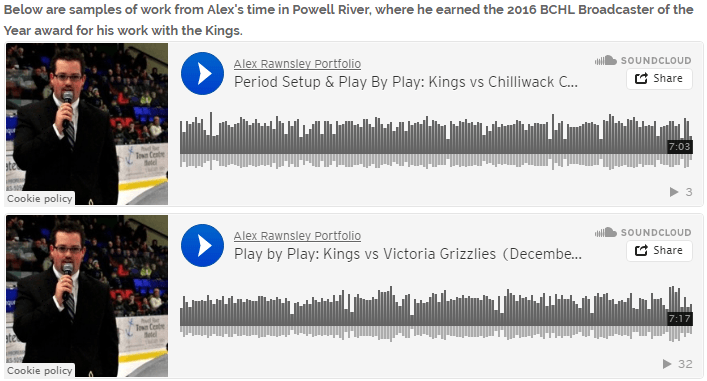 As for what to include, a lot of it is covered in the above link. You want to include your best stuff but make sure it’s not all dessert. Everyone loves dessert, but if all you ate were cookies and cake you’d feel pretty sick. Sportscasters are much more than highlight narrators…they’re story tellers and you have to showcase that you can tell a story. That you can convey emotion in tense situations, that you can carry a game when the action isn’t riveting.

For a ten minute demo-reel, you can open with a couple of highlights, include a chuck of unedited play by play, then finish off with an interview or talk segment. Don’t put music underneath unless it’s in a produced transitional element. Let your work speak for itself.

Technical: How To Put It Together

In the previous article on how to build a demo reel, I broke down what you should include, how much and in what order. For this update and to help answer Ashlyn’s question a little further, I thought I’d share a technique I’ve employed over the last five years to help find my best stuff.

For the last five years I worked with a Junior hockey teams, broadcasting anywhere between 65 and 75 games a season. Each broadcast was three hours long, multiply that by the 343 games I did and you’re looking at WEEKS of audio. How do you find your best stuff? I grade myself.

My setup allowed me to record my broadcast straight back into my computer. I took a line out from my mixer, plugged into the microphone port of my computer and used a program called Audacity to record. Using my scorebook layout that had a column for record time, I would note the time code on my recording whenever a goal or big moment occured, letting me cut highlights in a breeze.

However a bigger advantage of recording to your laptop is that you can save the files there and archive each broadcast. For hockey, I had a WAV file for each period that I’d archive in a folder after the game. Along with the recordings went the elements (interviews, etc) that I ran during that game. 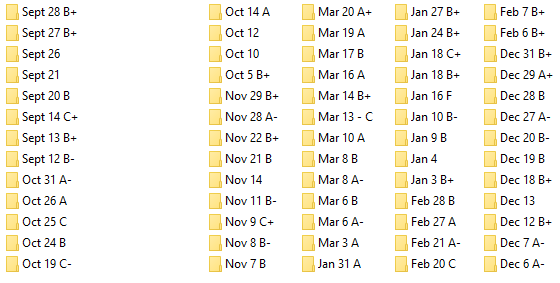 Following every game I would grade myself. How did I feel about that broadcast? Did I struggle? Was I smooth? I’d grade myself from A+ to F and file it away. Then midway or at the end of the season, I’d go through my archived folders for each game, pick out the A’s and A+’s and edit away. It saved me hours of listening through bad calls and allowed me to hone in on the good stuff right away.

This technique allowed me to clip out 7-12 minute segments of unedited play-by-play and produce demo-reel material very quickly. I store a selection of them on my portfolio website, but have many more pre-cut to include in packaged reels should the need arise.

For building demo reels, there just needs to be some thought and pre-planning. If you’re able to do the pre-planning through the season it’ll save you plenty of time down the road when perhaps timing is of the essence.