On a recent podcast involving Say the Damn Score’s Logan Anderson and a couple of other sportscasters, the topic of favourite places to visit came up. After talking about a couple of different cities with the group, the conversation morphed somewhat into favourite venues to call games from.

I call Junior Hockey in British Columbia. It’s a challenging role that sees me call 58 regular season games from early September to late February, then what is hopefully a long and fruitful playoff push (although it’s never quite been long enough). That means a lot of games in a short space of time and a lot of towns visited along the way…16 venues to be exact. 16 rinks with their own feel, flavour and energy.

So while my favourites won’t necessarily resonate with many of you, I thought it’d be fun to try and start a conversation on some of our favourite places to call a game from…and maybe more importantly, why? Here’s my top three favourite venues in no particular order:

Island Savings Centre in Duncan
The ISC is home to a lot of things. First and foremost the Cowichan Valley Capitals play their home games from the rink located on eastern Vancouver Island. Secondly, the world’s largest hockey stick and puck is visible from the highway on the side of the building. And finally, it’s home to the Caps Superfans. The broadcast spot in Cowichan is a unique one where you’re set up between two sections of fan seating. It’s a good location as you’re quite close to the ice and sightlines are generally pretty decent all the way through. However about 20-feet back from the table is where the team’s “Superfans” gather.

The Superfans are loud, passionate fans who don’t hesitate to make their opinions known. Perhaps it was a questionable call from the official, or a dirty play from an opposition player. If it happens on the ice, you’ll hear about it from the fans. Despite all the distractions, it makes for a wonderful broadcast atmosphere as echos of their cries are heard through a crowd mic and make for interesting listening.

Weyerhauser Arena in Port Alberni
Another divisional opponent which means multiple visits every season. The “Dog Pound” is home to the Alberni Valley Bulldogs, and quite possible the loudest fan base in the league that I work. The Bulldog faithful always make for a great game, win or lose. However it’s not just the fans that make things enjoyable for visiting broadcasters. The dedicated booth is nice, a mezzanine level setup where you’re “in” the crowd but separated from the masses. The goal horn is L-O-U-D which makes for great audio at the start and end of games…you just hope it doesn’t go off too many times in the middle.

To round out the experience, the team’s PA announcer gives the venue a big-league feel with his delivery….all add up to make it a really great atmosphere on a prime night.

Prince George Coliseum in Prince George
This one is on this list for one reason only and it’s location. The booth itself isn’t great, it’s cramped and can be difficult to get good sightlines out. It’s often pretty packed with home team staff which can make things difficult. However the saving grace for this setup is the fact that the broadcast gondola is directly above the player benches and penalty boxes. This means that a well place crowd microphone can pick up some great chatter between players and on the benches. The location also gives you a great view on upcoming lines and strategies from the coaches. 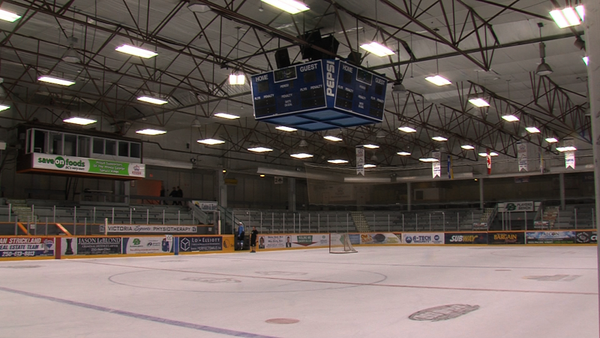 That’s my three, out of the 17 venues I got to on a regular basis. I haven’t included my home rink, which I love dearly for two reasons. One I didn’t want to be bias. And secondly, we changed up the press box substantially this year and I’m excited to get in and try the new digs out.

What are some of your favourite broadcast locations…and why? Tell us in the comments below or on Facebook and Twitter.