Five Myths (and One Fact) About Sports Broadcasting

Do a search on sports broadcasting, and the number one question that pops up EVERYWHERE is ‘how do I become a sportscaster’? Sure it comes in variations with focuses more on play by play, or sports talk, or reporting, but the general thought is the same…how do I get on this wonderful crazy ride that is the sports business?

There is so much glitz and glamour surrounded being on television. The lure of being a “celebrity”, no matter how small can be very enticing…plus the reports of top sportscasters earning millions of dollars and calling major events make this an attractive career choice. Getting paid to watch and cover sports, what could be better?

So I wanted to come up with a list of common myths or thoughts on the business, things I’ve seen or once assumed about sports casting and after over 7 years on air and 10 years in the broadcast industry, how I know better.

So there are my five myths of what I’ve heard a lot of people say about sports casting. I do feel that the theme of this post has been a little negative, so I want to end on a positive note and here’s one certifiable, undeniable fact of the sports broadcasting industry and those who work in it. 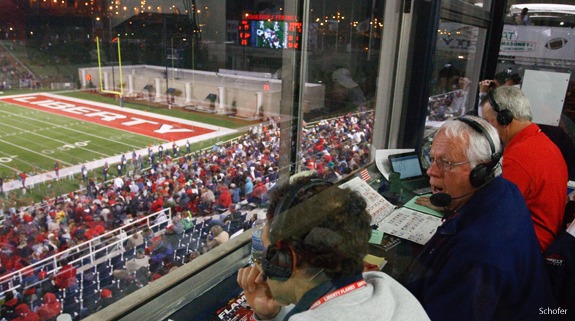 Sports broadcasting is like many other industries, you get back what you put into it. If you can balance everything in your life, handle the absences, the lack of sleep and everything negative that comes with essentially being part of a travelling circus for 6 months then you’ll struggle to find anything more satisfying to do with your life.